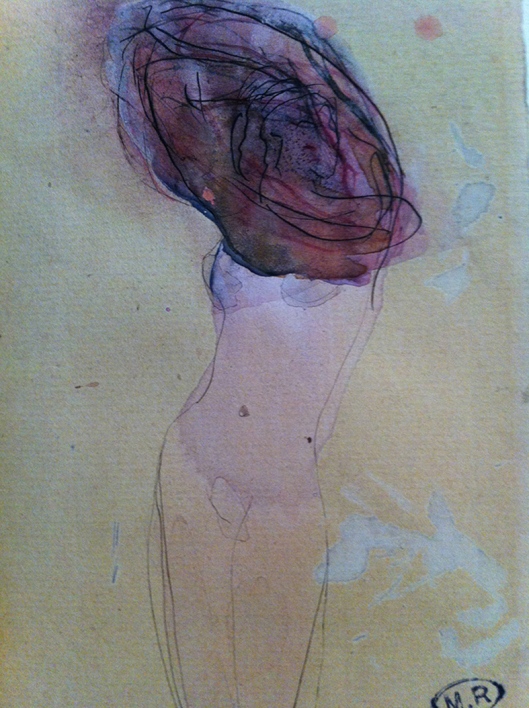 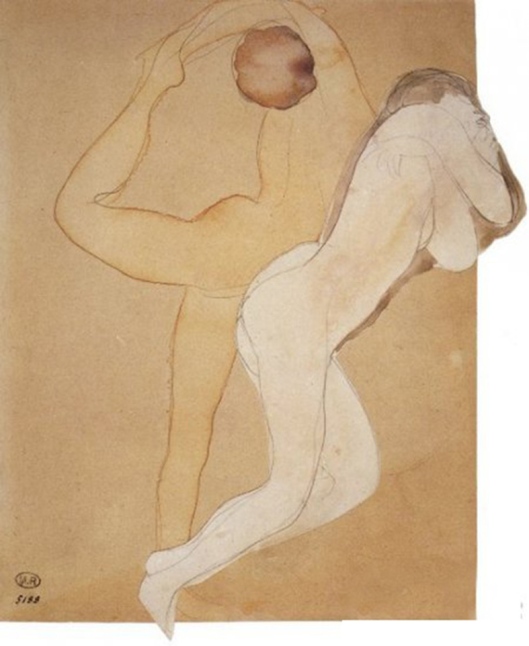 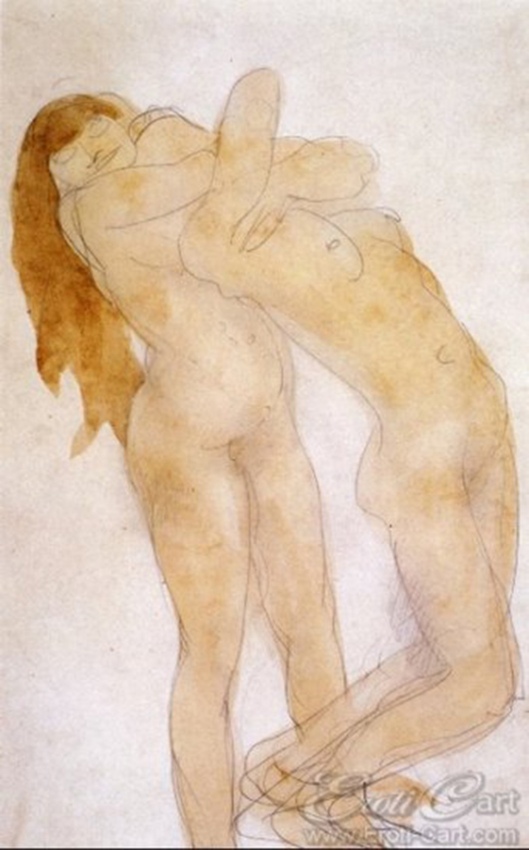 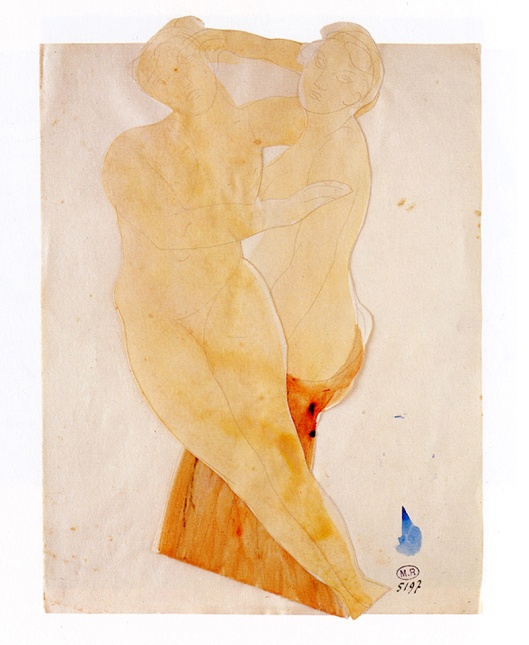 Rodin’s nude sketches and provides a brief overview of the artist’s scandalous presence within fin-de-siecle Paris. These simple but suggestive watercolor and pencil drawings, taken from the artist’s later years, convey an immediacy and sensuality that belie his better-known work in monumental sculpture. Dismissed as obscene at the time of their drafting, the influence of Rodin’s confident but delicate eroticism can be seen in the later works of Schiele, Picasso, and Matisse.

Much of Auguste Rodin’s work defied traditional artistic conventions but out of the public eye, he took a further decisive step towards modernism in a different genre.

By the time of creating these drawings in his career he had gained the notoriety and the means to afford live models, often several at a time. They remained in motion during the drawing sessions, while Rodin sketched without interruption, rarely looking down to see what he had drawn. The women’s bodies are spayed out, liberated and unashamed. The delicate nature of Rodin’s line and gentle wash of watercolour in comparison to the honest portrayal of the women’s bodies is totally new to look at even now over a hundred years later. Theres something incredibly powerful about the sexuality created in these drawings with only a couple of pencil lines which is really quite genius. 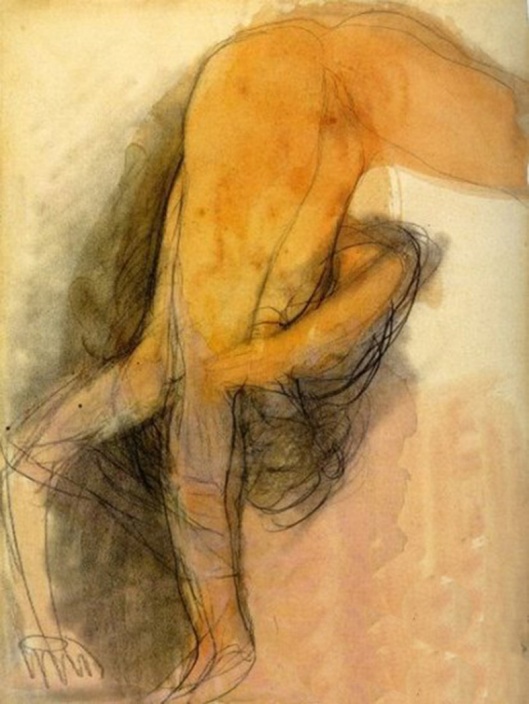 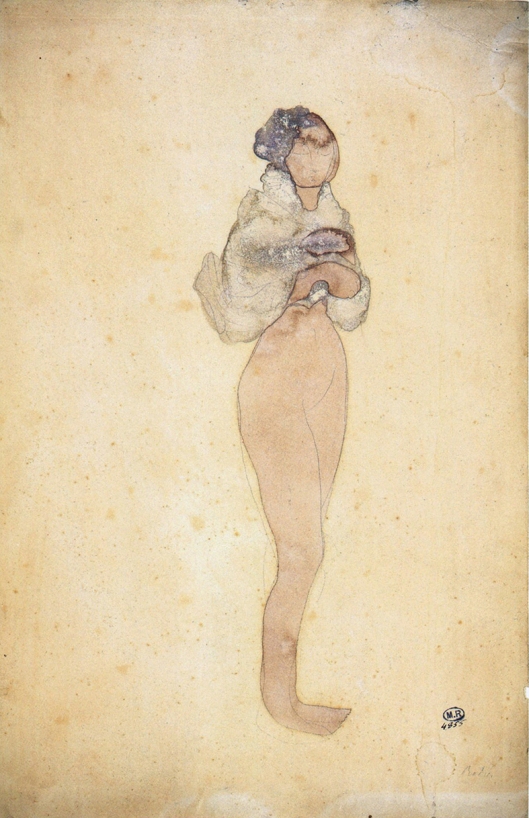 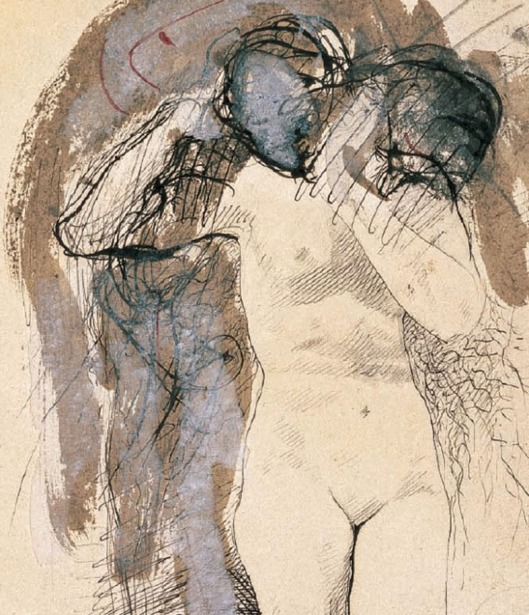 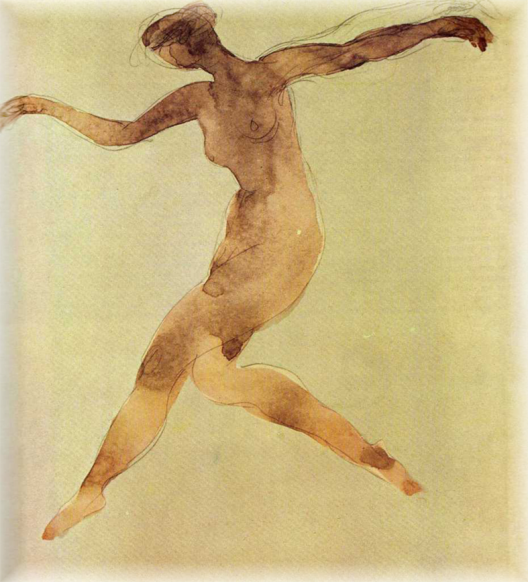 Representation of Sabbat gatherings from the chronicles of Johann Jakob Wick.1250 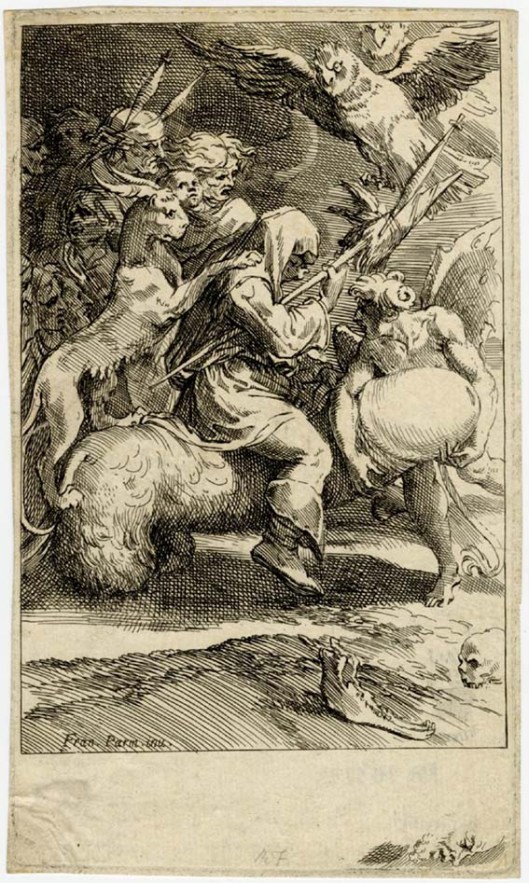 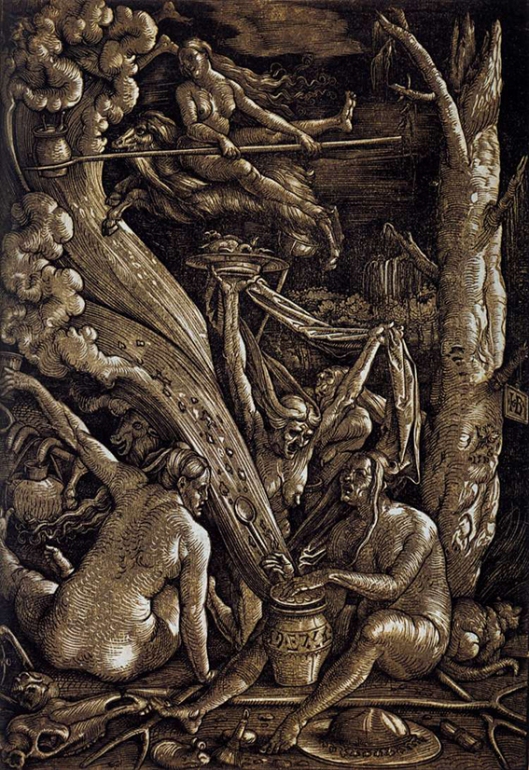 Attributed to Andries Jacobsz, Preparations for a Witches Sabbath 1610 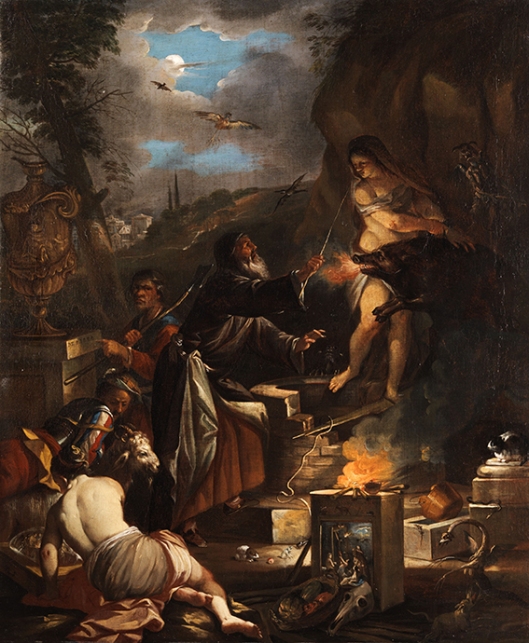 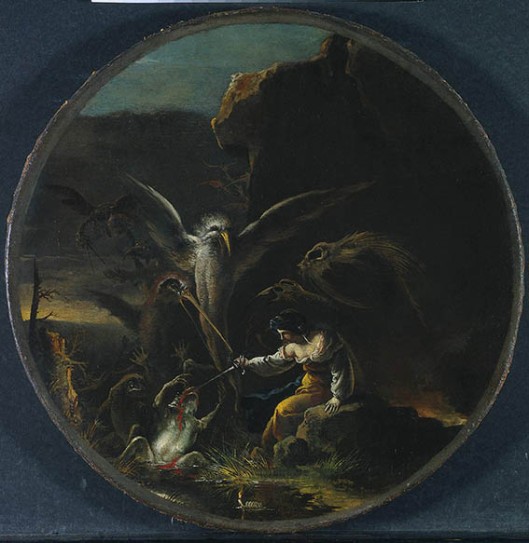 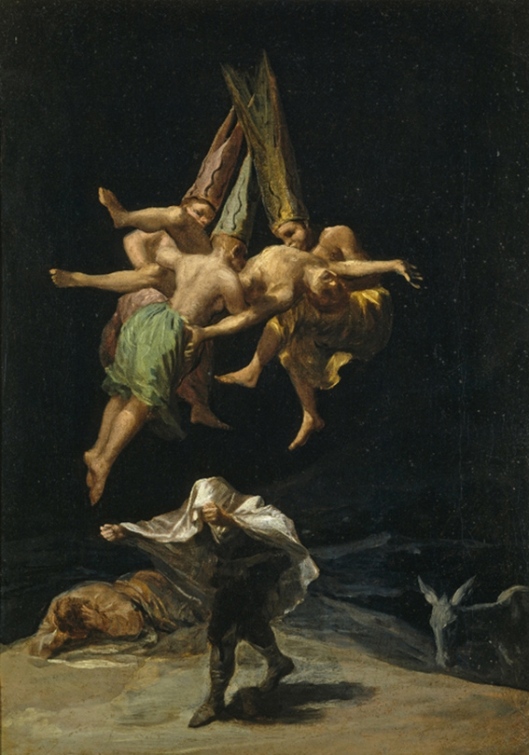 The Witches’ Sabbath or Sabbat is a meeting of those who practice witchcraft and other rites.

European records indicate cases of persons being accused or tried for taking part in Sabbat gatherings, from the Middle Ages to the 17th century or later. The English word “sabbat” is of obscure etymology and late diffusion, and local variations of the name given to witches’ gatherings were frequent. “Sabbat” came indirectly from Hebrew שַׁבָּת (Shabbath, “day of rest”). In modern Judaism, Shabbat is the rest day celebrated from Friday evening to Saturday nightfall; in modern Christianity, Sabbath refers to Sunday, or to a time period similar to Shabbat in the seventh-day church minority. In connection with the medieval beliefs in the evil power of witches and in the malevolence of Jews and Judaizing heretics (both being Sabbathkeepers), satanic gatherings of witches were by outsiders called “sabbats”, “synagogues”, or “convents”. I n spite of the number of times that authorities retold stories of the sabbat, modern researchers have been unable to find any corroboration that any such event ever occurred. Beleif in the existence of witches was widespread in late medieval and early-modern Europe. Many religious authorities believed there was a vast underground conspiracy of witches who were responsible for the horrific famines, plague, warfare, and problems in the Catholic Church that became endemic in the fourteenth century. By blaming witches, religious authorities provided a handy scapegoat for those who might otherwise question God’s goodness. Stories of the sabbat had prurient and orgiastic elements, which caused these stories to be told and retold. In effect, the sabbat acted as an effective ‘advertising’ gimmick, causing knowledge of what these authorities believed to be the very real threat of witchcraft to be spread more rapidly across the continent. Unfortunately that also meant that stories of the sabbat promoted the hunting, prosecution, and execution of supposed witches. The descriptions of Sabbats were made or published by priests, jurists and judges who never took part in these gatherings, or were transcribed during the process of the witchcraft trials. That these testimonies reflect actual events is for most of the accounts considered doubtful. Norman Cohn argued that they were determined largely by the expectations of the interrogators and free association on the part of the accused, and reflect only popular imagination of the times, influenced by ignorance, fear, and religious intolerance towards minority groups. Some of the existing accounts of the Sabbat were given when the person recounting them was being tortured. and so motivated to agree with suggestions put to them.

Many of the diabolical elements of the Witches’ Sabbath stereotype, such as the eating of babies, poisoning of wells, desecration of hosts or kissing of the devil’s anus, were also made about heretical Christian sects, lepers, Muslims, and Jews. The term is the same as the normal English word “Sabbath” (itself a transliteration of Hebrew “Shabbat”, the seventh day, on which the Creator rested after creation of the world), referring to the witches’ equivalent to the Christian day of rest; a more common term was “synagogue” or “synagogue of Satan”, possibly reflecting anti-Jewish sentiment, although the acts attributed to witches bear little resemblance to the Sabbath in Christianity or Jewish Shabbat customs 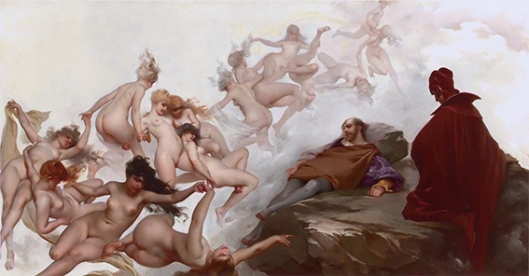 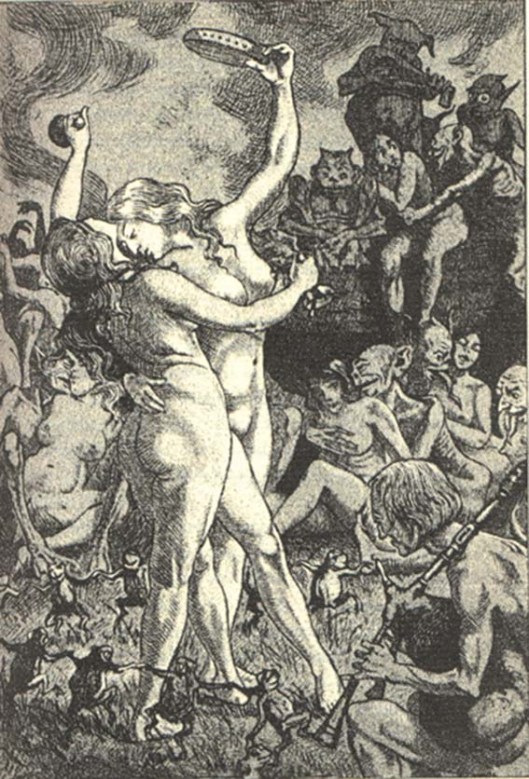 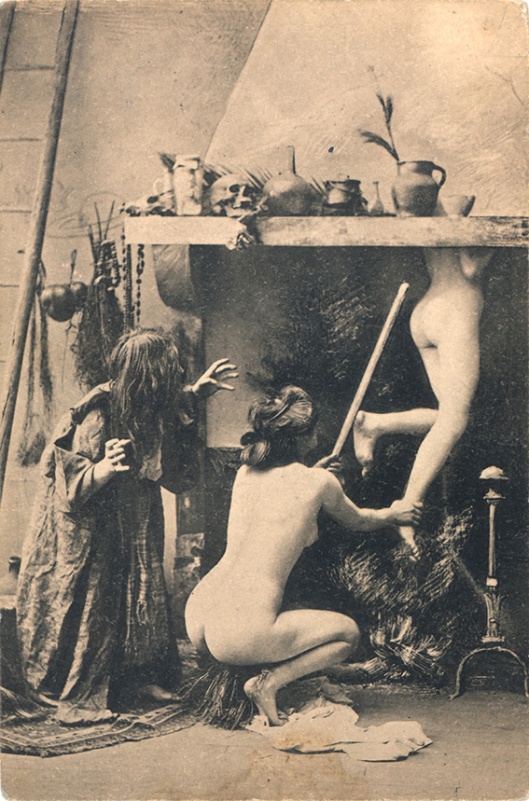